He was also the 1999 U.S. Junior Amateur. He spent one year at the University of Southern California where he was the Pacific-10 Conference Freshman of the Year, he switched to Oklahoma State University and was a two-time Big 12 Conference Player of the Year, as well as a two-time first team All American. Mahan married Kandi Harris in 2011. Harris is a Dallas Cowboys cheerleader and Dallas Mavericks dancer. Hunter is also a member of the "Golf Boys" the proceeds from their popular YouTube video for the song "Oh Oh Oh" will support both Farmers and Ben Crane charitable initiatives. Currently Farmers Insurance will donate $1,000 for every 100,000 views of the video. Some of his most recent accomplishments include his third PGA Tour title on August 8, 2010, at the WGC-Bridgestone Invitational. And his February 2012 second win of the WGC tournament at the WGC-Accenture Match Play Championship. 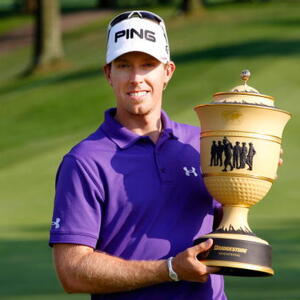