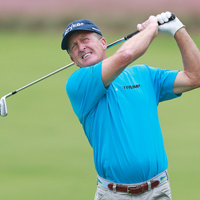 Fred Funk Net Worth: Fred Funk is an American professional golfer who has a net worth of $14 million. Fred Funk was born in Takoma Park, Maryland in June 1956. As a child he played many sports and boxed for a junior boys club. He played golf on the gold team at his high school. Funk was cut from the golf team at the University of Maryland. He transferred to Prince George's Community College and then came back to Maryland two years later and made the team. He graduated in 1980 and turned professional in 1981. Funk was a golf coach for the University of Maryland from 1982 to 1988. He became a member of the PGA Tour in 1989. Funk won eight events with the PGA Tour starting with the Shell Houston Open in 1992. In 1995 he won the Ideon Classic at Pleasant Valley and the Buick Challenge. He won the B.C. Open in 1996 and the Deposit Guaranty Golf Classic in 1998. In 2004 Fred Funk won the Southern Farm Bureau Classic. He won The Players Championship in 2005 and the Mayakoba Golf Classic at Riviera Maya-Cancun in 2007. He finished 4th at the PGA Championship in 2002 and 6th at the U.S. open in 2004. Funk won the Presidents Cup representing the United States in 2005. He joined the Champions Tour in 2006. At the end of 2013 his PGA Tour career earnings were just over $21 million and his Champions Tour earnings were just over $9 million.