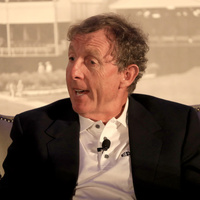 David Leadbetter was born in England in June 1952. He competed on the European and Southern African tours as a player but did not have much success. Leadbetter began instructing other golfers and helped Nick Faldo rebuild his swing which lead to him winning six major championships. David Leadbetter runs an international chain of golf academics which are headquartered in Davenport, Florida at the ChampionsGate Golf Club. The academy ahs branches in North American, Europe, Asia, and Africa. He has produced videos, DVDs, a video game, and more. He has instructed major champions including Ernie Els, Michelle Wie, Lydia Ko, Se Ri Pak, Nick Price, Kathy Baker, Ian Baker-Finch, Trev Immelman, Danielle Kang, and Suzann Pettersen. In 2000 he founded golf simulator GOLFZON.