Darren Clarke net worth: Darren Clarke is an Irish professional golfer who has a net worth of $30 million. Darren Clarke was born in Dungannon, County Tyrone, Northern Ireland on August 14, 1968. He played collegiate golf at Wake Forest University and turned pro in 1990. In 1993 he picked up his first European Tour Win, finishing first in the Alfred Dunhill Open in Belgium and ending up eighth on the Order of Merit, a list of the top earners on the European Tour.

The following year, Clarke played in his first U.S. Open Tournament, though he failed to make the cut. Clarke won his second European Tour tournament in 1996 at the Linde German Masters, and continued improving steadily, winning at least one European Tour tournament every year from 1998-2003, including his first PGA Tour win in the 2000 Andersen Consulting Match Play Championship. After going almost five years without winning a tournament, Clarke won the BMW Asian Open in 2008. In 2011, after 20 attempts at winning the Claret Jug, he finally won his first and only major PGA Tour championship, at the 2011 open. He dedicated the victory to his two sons and late wife, who died of breast cancer in 2006. Clarke has also been a member of five consecutive Ryder Cup teams, from 1997 to 2006. 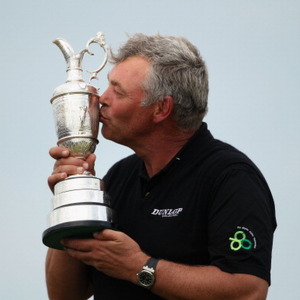