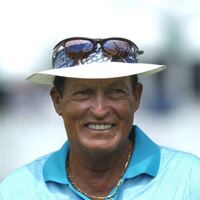 Chi Chi Rodriguez net worth: Chi Chi Rodriguez is a Puerto Rican professional golfer who has a net worth of $15 million dollars. Chi Chi Rodriguez was born in Rio Piedras, Puerto Rico, and began carrying water on a nearby sugar plantation in order to help earn money for his family when he was seven years old. He stumbled onto a golf course, and after observing the caddies, decided that he was going to earn money for his family as a caddy. He taught himself to golf by watching the players on the course, using a golf club made out of a tree branch, and a golf ball made out of a metal can. By the time he was twelve, it was clear he had real talent. He joined the U.S. Army after high school, and continued to play golf whenever his schedule allowed. He turned professional in 1960, and from 1963 to 1979, he won eight major titles on the PGA Tour. He then joined the Senior PGA Tour (later known as the Champions Tour), and won 22 tournaments. He played his last round of professional golf at age 76 in 2012.