What is Camilo Villegas's Net Worth?

Camilo Villegas is a Colombian professional golfer who has a net worth of $18 million. Camilo Villegas plays on the PGA Tour. His PGA titles include the BMW Championship, the Honda Classic, and the Wyndham Championship. Often dubbed "Spider-Man," Villegas is known for his flashy designer clothing and his style of stretching himself out on the ground to read greens before putting.

Camilo Villegas was born on January 7, 1982 in Medellín, Colombia. He took up golf early on in life, and won multiple National Junior Championships in Colombia between the ages of eight and 15. When he was 16, Villegas became the first player in his country's golf history to win the Amateur's Grand Slam in a single year. He continued his impressive achievements a few years later when he became only the second golfer ever to win the Colombian Open as an amateur.

In 2001, Villegas moved to the United States to attend the University of Florida on an athletic scholarship. There, he played in the NCAA for the Florida Gators men's golf team. As a freshman, Villegas was a member of the Gators' NCAA championship team, and was named the Southeastern Conference Freshman of the Year. He earned two more SEC Player of the Year honors in 2002 and 2004; he was also named an All-American for all four years of his college career. Villegas graduated from Florida with a bachelor's degree in business administration in 2004. 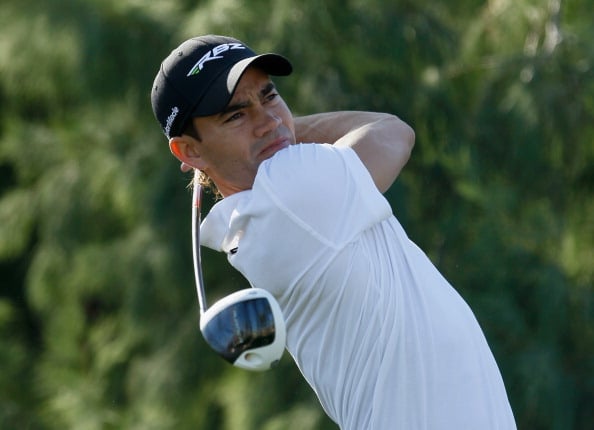 Camilo Villegas launched his professional career on the PGA Tour in 2004, and earned his Tour card just before the 2006 season. Kicking off his rookie year with a bang, he claimed two second-place finishes and one third-place finish in only his first nine events. The next season, Villegas made his Masters debut and won the Coca-Cola Tokai Classic on the Japan Golf Tour. He qualified for the Masters again in 2008, as well as for the Tour Championship in Atlanta, Georgia, where he finished in the top ten. Villegas had many other major achievements that year, including winning the Telus World Skins Game and notching a record-breaking second round in the Open Championship by shooting 65. Later in 2008, he won the BMW Championship, his first PGA Tour title. He followed that with another PGA victory, in the Tour Championship, boosting him to seventh place in the Official World Golf Rankings.

Although he failed to win any tournaments in 2009, Villegas did have five top-ten finishes for the season. He improved his record the next year, winning the Honda Classic to give him his third PGA Tour title so far. However, Villegas soon lost his Tour card, forcing him to take on conditional status for a few years. In 2014, he regained his full privileges and went on to win the Wyndham Championship, earning him an invitation to the 2015 Masters. After losing his Tour card for 2016, he regained it in 2017.

As of this writing, Camilo Villegas has earned $22 million in tournament prizes. He has earned at least $10 million from endorsements

Camilo Villegas has a younger brother named Manuel who is also a professional golfer; he plays on the Korn Ferry Tour and the PGA Tour Latinoamérica. Previously, he won the 2008 Colombian Open.

In 2018, Villegas had a daughter named Mía. When she was 22 months old in the summer of 2020, she passed away after a battle with cancer. Following the tragedy, the PGA Tour paid tribute to Mía by handing out rainbow pins to players, as the young girl had loved rainbows. Villegas later returned to competitive golf, competing on the Korn Ferry Tour.