What is Bryson DeChambeau's net worth?

Bryson DeChambeau is a professional American golfer who plays on the PGA Tour. As of this writing Bryson DeChambeau's net worth is $14 million. He has won multiple titles, including the 2020 US Open, and as an amateur, became one of only five players to claim both the NCAA Division 1 championship and the US Amateur in the same year. Known for his analytical athletic approach, DeChambeau has been nicknamed "The Scientist."

Bryson DeChambeau was born in 1993 in Modesto, California to parents Janet and John. When he was seven, the family moved to Clovis, where DeChambeau later attended Clovis East High School and won the California State Junior Championship. Upon graduating in 2012, he accepted a scholarship to Southern Methodist University in Dallas, Texas.

At SMU in 2015, DeChambeau became the first player from the school to win the NCAA individual championship, recording a score of 280 to win by a single stroke. He made more history only months later, when he won the US Amateur title. As a result, DeChambeau became the fifth player in history to win both the NCAA and US Amateur titles in a single year, joining Ryan Moore, Tiger Woods, Phil Mickelson, and Jack Nicklaus.

DeChambeau made his PGA Tour debut as an amateur at the FedEx St. Jude Classic in June of 2015. There, he tied for 45th place. Subsequently, he played in his first major championship at the US Open, but missed the cut by only four strokes. Before turning professional, DeChambeau played in various events, including the 2015 Australian Masters, where he tied as runner-up behind Peter Senior.

Right after playing in the 2016 Masters, DeChambeau went professional, and signed a long-term agreement with Cobra-Puma Golf. Days later, he made his professional debut at the RBC Heritage, tying for fourth and earning around $260,000. Following this, he made it to the US Open, where he tied for 15th place. Although he was unable to qualify for a 2017 PGA Tour card, DeChambeau was able to secure a spot in the Web.com Tour Finals. Thanks to his victory at the DAP Championship, he managed to earn his card. Major triumph followed, as DeChambeau notched his first PGA Tour victory at the John Deere Classic in July of 2017, winning by a single stroke over Patrick Rodgers. The next summer, he won the Memorial Tournament in Dublin, Ohio in a sudden-death playoff, giving him his second Tour victory. This was succeeded by further notable wins, including victories at the Northern Trust and the Dell Technologies Championship. The latter win put DeChambeau more than 2,000 points ahead of second-place player Dustin Johnson in the FedEx Cup rankings, and also granted him top seeding at the Tour Championship. However, after finishing 19th in the Tour Championship, DeChambeau fell to third place in the FedEx Cup.

In the 2018 Ryder Cup, DeChambeau was named United States team captain by Jim Furyk. Ultimately, Europe defeated the US team, while DeChambeau lost his singles match against Alex Norén. He returned to victory a little later by winning the Shriners Hospitals for Children Open in Las Vegas, Nevada, a victory that brought him to fifth place in the Official World Golf Ranking. The next year, DeChambeau scored a win at the Omega Dubai Desert Classic, claiming his maiden European Tour title by winning the tournament by seven shots. At the end of 2019, he played on the US team at the Presidents Cup in Australia, winning 16-14. More wins followed in 2020, starting with a victory at the Rocket Mortgage Classic in Detroit, Michigan, where DeChambeau finished with a career-best 23-under-265. 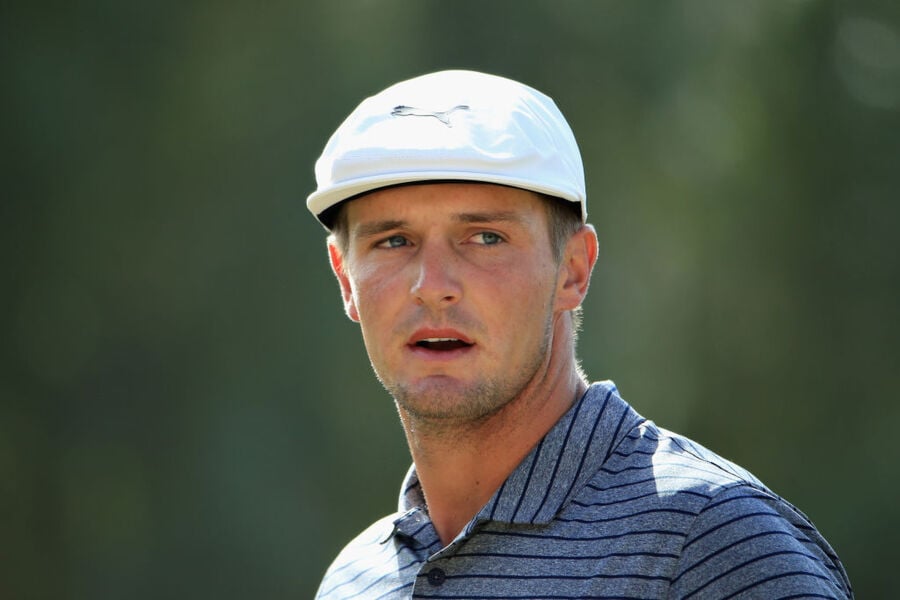 At the 2020 PGA Championship, DeChambeau finished tied for fourth place; it was his first top-10 finish in a major championship. Not long after this, at the US Open, he came from two strokes behind at the beginning of the final round to claim his first major championship title. DeChambeau was the only player under par in the final round, and the only player to finish under par for the tournament. Moreover, he became only the third player in history to win the NCAA individual championship, the US Amateur, and the US Open.

DeChambeau's clubs are designed specifically to his specifications, with thicker-than-typical JumboMax grips and wedges and irons that are all cut to exactly the same length of 37.5 inches. Additionally, DeChambeau uses custom-made carbon graphite shafts on each of his clubs.

Over his career, DeChambeau has become involved in a number of controversial interactions with rules officials. After one of his shots went under a fence and out of bounds at the 2020 Memorial Tournament, he argued that only part of the ball was out of bounds and that he should be permitted to play it. However, PGA Tour rules official Ken Tackett ruled against him. Two weeks later, at the WGC-FedEx St. Jude Invitational, DeChambeau argued that there were red ants around a ball he shot near the base of a tree. He asked for a free drop due to the potential danger of the ants, and spent close to three minutes arguing with the official, who was once again Ken Tackett. In the end, he was forced to play the ball from where it lay.