Brooks Koepka has won events on the PGA Tour, European Tour, Japan Golf Tour, and the Challenge Tour. He won the U.S. Open in back to back years in 2017 and 2018. Koepka tied for 4th at the PGA Championship in 2016 and tied for 6th at The Open Championship in 2017. In 2017 he tied for 11th at the Masters Tournament. In 2014 he was won the Sir Henry Cotton Rookie of the Year award. Brooks Koepka also won the Waste Management Phoenix Open in 2014. After winning back to back U.S. Opens he was ranked 4th in the Official World Golf Rankings. He won both the U.S. Open and the PGA Championship in 2018. In 2018 he also won the PGA Player of the Year award and the PGA Tour Player of the Year award. Through April 2019, Brooks won $30.1 million in tournament prize money alone. He has also earned millions from endorsements. On May 19, 2019 Brooks won the 2019 PGA Championship. 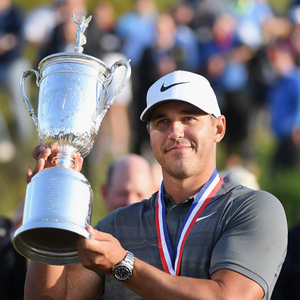