Bob Tway Net Worth: Bob Tway is an American professional golfer who has a net worth of $9 million. Bob Tway was born in Oklahoma City, Oklahoma in May 1959. Bob was introduced to golf at five years old by his father and grandfather. He played in his first golf tournament at seven years old.

As a junior golfer Tway won the Redding Country Club Championship. He played golf at Oklahoma State University where he was a three-time first-team All-American. His team won the NCAA Championship in his freshman year and again when he was their star player as a junior. In his senior year he won the Haskins Award before turning pro in 1981 and joining the PGA Tour in 1985. Tway had eight PGA Tour wins starting in 1986 where he won four events including his only major championship. That year he won the Shearson Lehman Brothers Andy Williams Open, Manufacturers Hanover Westchester Classic, Georgia-Pacific Atlanta Golf Classic, and the PGA Championship. He also won the PGA Player of the Year award that year. In 1989 Tway won the Memorial Tournament and the next year he won the Las Vegas Invitational. He won the MCI Classic in 1995 and the Bell Canadian Open in 2003. In 1986 and 1987 Bob spent 25 weeks in the top 10 of the Official World Golf Rankings. He finished 3rd at the U.S. Open in 1998, 5h at The Open Championship in 1991, and 8th at the Masters Tournament in 1986. Tway won the PGA Tour Comeback Player of the Year award in 1995. Tway joined the Champions Tour in 2009. 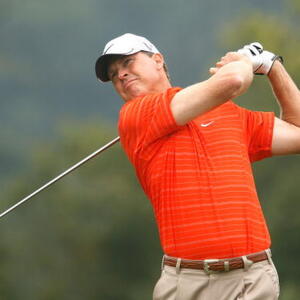