Bill Haas Net Worth: Bill Haas is an American professional golfer who has a net worth of $16 million. He is currently a member of the PGA Tour. His biggest career achievement to date is winning the prestigious FedEx Cup in 2011. His father, Jay Haas is a former PGA Tour player.

Bill Haas was born on May 24, 1982 in Charlotte, North Carolina but was primarily raised in the Greenville, South Carolina Suburb of Greer. Haas was his family's third member to attend and play golf at Wake Forest University's campus in the town of Winston-Salem, North Carolina. This was in the footsteps of Jay, his father, and Jerry, his uncle. Haas enjoyed a distinguished career in college golf where he was a triple first-team All-American, quadruple All-ACC, twice ACC player-of-the-year, and 2001's ACC rookie-of-the-year. Altogether, he won 10 career college competitions, which included winning the Haskins, Jack Nicklaus, and Ben Hogan Awards in his 2004 senior year. Haas also broke NCAA's record for the lowest golf scoring average and was a prominent member of 2003's Walker Cup team as well participating in 2 Palmer Cup teams before he earned professional accreditation in 2004. Haas was picked by the U.S. captain Fred Couples to join the 2011 Presidents Cup team that included Tiger Woods. The USA went retained the trophy partly due to Haas' contribution of 1.5 points, and an overall weekly record of 1-3-1 for the team. Haas hails from a renowned family of excellent golfers. Jay, his father, won the PGA Tour 9 times while his uncle Jerry, and brother Jay Haas Junior, were active participants of the PGA Tour for many years. He also happens to be the great nephew of Bob Goalby, who won the 1968 Masters Tournament. 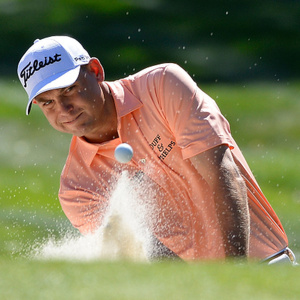