How much is Bernhard Langer Worth?

Bernhard Langer Net Worth and career earnings: Bernhard Langer is a German professional golfer who has a net worth of $25 million dollars. Born in 1957 in Anhausen, West Germany, Bernhard Langer became a pro golfer in 1976. He is a two-time winner of The Masters, earning the green jacket in 1985 and 1993. He is the world's first golfer to be ranked number one, as the Official World Golf Rankings began in 1986. As of 2014, he has the second-most career wins on the European Tour. He is one of just four other players who have won tournaments on every continent where golf is played. He captained but did not play on the 2004 Ryder Cup-winning European team. Langer is well known for suffering from the yips, which occurs when a player flinches while putting. He infamously yipped on a five-foot putt during the 1991 Ryder Cup that would have allowed the championship to remain with the European team. He was inducted into the World Golf Hall of Fame in 2002 and earned European Tour Player of the Year honors twice. He is a three-time Jack Nicklaus Trophy award winner and a five-time recipient of the Arnold Palmer Award. He and his wife, Vikki Carol, have been married since 1984 and have four children. They live in Anhausen and Boca Raton, Florida. 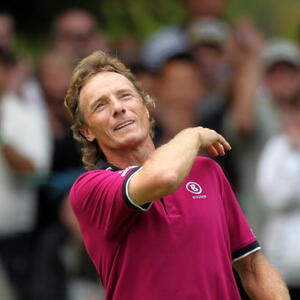