Annika Sörenstam net worth and career earnings: Annika Sörenstam is a Swedish retired professional golfer who has a net worth of $40 million dollars. Annika Sörenstam was born on October 9, 1970 in Bro, Sweden. Her golf career achievements earned her a ranking as one of the most successful female golfers in history.

Prior to leaving the world of competitive golf at the end of 2008, her winning streak earned her the recognition of being the female golfer with the most wins to her name. Sörenstam has had 72 LPGA wins (over 90 professional wins total). Her tally for major championships alone is 10 (between 1995 and 2006, when her world ranking was at #1). Sörenstam met her first husband, David Esch, in 1994 on the driving range at Moon Valley Country Club in Phoenix, Arizona, where he was working at the time. They married in Lake Tahoe January 4, 1997 and later divorced in 2005. In 2007, she married Mike McGee, the managing director for the ANNIKA brand of businesses (and son of former PGA Tour and Champions Tour player Jerry McGee). Their daughter Ava Madelyn was born September 1, 2009. Sörenstam gave birth to their son William Nicholas in 2011. Since 2006, Sörenstam has maintained dual citizenship (Sweden and the United States). 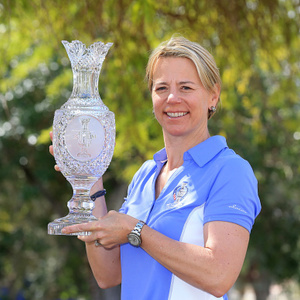