Angel Cabrera Net Worth: Angel Cabrera is an Argentine professional golfer who has a net worth of $15 million. Born on September 12,1969, in Córdoba, Argentina, Angel Cabrera is currently playing on both the European Tour and PGA Tour. A two-time major champion, he has won the 2007 U.S. Open and the 2009 Masters, and each time he became the first Argentine to win either tournament.

Thanks to his unique waddling gait, he became affectionately known as "El Pato" in Spanish or as "The Duck" in English. Young Cabrera was not aware that golf will be his future profession, when he entered the Córdoba Country Club as a caddy at the age of 10. Soon, the club almost turned into his home and there he learned to play golf along with other caddies who were competing against each other for money. Cabrera's powerful swing caught the eye of members, one of whom bought him his first set of clubs when he was 16. Next, he was on the way to the European Tour Qualifying School, but only on his fourth trip in 1995 he did mange to qualify for membership of the European Tour. Having turned professional at the age of twenty, Cabrera first win was the 2005 BMW Championship, which is the most prestigious event on the European Tour schedule other than the majors and the World Golf Championships. He has since participated in around 150 PGA events, and he and Woods became the only active PGA Tour members who have won both the US Open and the Masters as of 2009. Married with two children, Angel Cabrera currently resides in his hometown Cordoba. 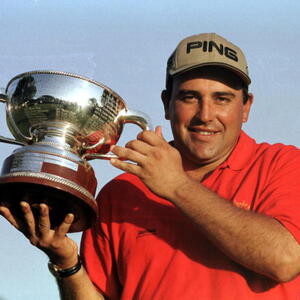