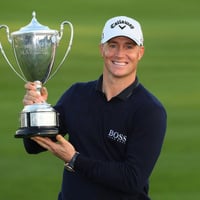 Alex Noren net worth: Alex Noren is a Swedish professional golfer who has a net worth of $13 million. Alex Noren was born in Stockholm, Sweden in July 1982. He is a member of the European Tour after turning professional in 2005 and playing for Oklahoma State University. Noren has nine professional wins during his career with eight coming on the European Tour and one more on the Challenge Tour. He finished tied for 9th at The Open Championship in 2012. Noren also finished tied for 34th at the PGA Championship in 2011 and tied for 51st at the U.S. Open in 2011. His European wins came at the Omega European Masters in 2009 in 2016, the Saab Wales Open in 2011, the Nordea Masters in 2011 and 2015, the Aberdeen Asset Management Scottish Open in 2016, the British Masters in 2016, and the Nedbank Golf Challenge in 2016.