What is Adam Scott's Net Worth?

Adam Scott is an Australian professional golfer who has a net worth of $50 million. He plays primarily in the PGA and achieved a world ranking of number one in 2014. Over the course of his career, Scott has won 31 professional tournaments. Perhaps his most notable victory came at the 2013 Master's Tournament, which remains his only major championship. In addition, Adam is the only Australian to have won a Masters event.

Outside of this achievement, Scott has claimed victory at the 2004 Players Championship, the 2011 WGC-Bridgestone Invitational, and the 2016 WGC-Cadillac Championship. Adam also narrowly missed out on a win at the 2012 Open Championship, losing by a single stroke to Ernie Els after leading by four strokes with four holes to play.

As of this writing, Adam has earned more than $57 million in purses alone. That does not include tens of millions he has earned from endorsements. In February 2020 Adam earned a $9.3 million purse by winning the Genesis Open at the Riviera Country Club in the Pacific Palisades. He was the #1 golfer in the world for a time in the middle of 2014.

Adam Derek Scott was born on July 16th of 1980 in Adelaide, Australia. At the age of nine, he relocated with his family to Sunshine Coast, Queensland. The family then relocated once again in 1993, this time settling on the Gold Coast by the time Adam was 12. During his high school years, he honed his golf skills as part of his regular academic duties and became part of the Golf Australia National Squad. After graduating from secondary school, Scott attended the University of Nevada in Las Vegas.

Adam Scott went pro midway through the 2000 season. Within eight starts as a professional, he had earned his card for the 2001 European Tour. During this period, he finished in sixth place at the Linde German Masters. Another notable victory during these early years came at the Alfred Dunhill Championship in Johannesburg. This was his first professional title, and he wrapped up the season with a number of other top-3 finishes.

In 2003, he recorded his first victory on the PGA Tour at the inaugural Deutsche Bank Championship. In 2004, he followed up with victory at the Players Championship. The win wasn't easy, and he almost threw it away after finding the water hazard. However, he fought back with a 40-yard up and down, including a ten-footer for a bogey. This was enough to win by a single shot. In doing so, he became the youngest winner of The Players Championship at the age of 23. This record was eventually beaten by Kim Si-woo.

In 2005, he won the Nissan Open and the Singapore Open but competed less in the European Tour from 2006 onwards. Focusing on the PGA Tour, he eventually won the Tour Championship by three strokes. He followed up with another win on the PGA Tour in 2007, claiming victory at the Shell Houston Open. 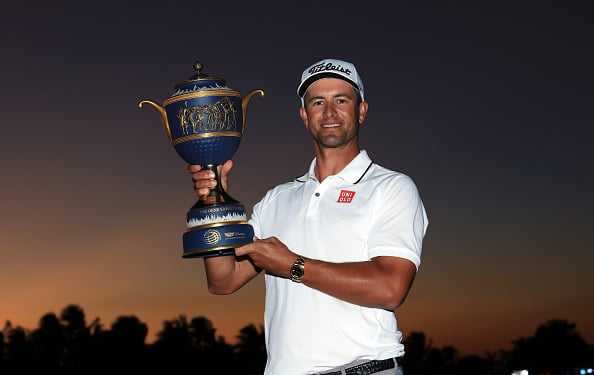 2008 was a difficult season for Scott, as he struggled with both injuries and illnesses. However, he still managed to win the Qatar Masters and the EDS Byron Nelson Championship. However, he had a complete "off" year during 2009, dropping out of the top 50 in the world rankings and finishing outside of the top 100 on the PGA Tour money list. His only consolation was a win at the Australian Open.

Further wins came throughout the next few years, however, and he finished runner-up at the Open Championship in 2012. In 2014, he achieved the number-one ranking. He held this position from the 19th of May until August of 2014, for a total of eleven weeks. In 2020, he won the Genesis Invitational at the Riviera Country Club in Pacific Palisades. This marked his first PGA Tour win after many years of disappointing results.

Adam Scott once dated Anna Ivanovic, the former world number one in tennis. However, the relationship lasted less than a year. They did get back together in 2011, but they ultimately chose to part ways permanently in 2012. In 2014, Adam married a Swedish architect named Marie Kojzar, a woman who dated back in the early 2000s. Although Marie and Adam split up in the mid-2000s, they reunited in 2013 and became engaged. In 2015, they welcomed their first child into the world. In 2017, they had a second child together.

As of this writing, Adam has earned more than $57 million in purses alone. This sum does not include tens of millions in additional earnings from various brand endorsements over the years. For tax purposes, Adam Scott is officially a resident of Switzerland.

In 2013, it was reported that Scott had accepted a significant loss on an apartment in Australia. He originally purchased the two-level apartment for $4.4 million in 2004. He first tried to sell the residence in 2010, but he struggled to find a buyer for years. In 2013, he finally accepted a bid of just $2.4 million. This equates to losses of more than 55%. The apartment features Italian limestone floors, a large balcony overlooking Surfers Paradise beach, a study, a wet bar, and a private garden courtyard with a spa and barbecue area. He purchased several other apartments in the area, and he offloaded a second apartment for $5.9 million in 2007.

A year later, it was reported that he was selling his home in Abu Dhabi. The home was built in 2008, and Scott actually purchased it before it was built. His plan was to use it as a home base while competing on the European Tour, but that didn't really pan out. He reportedly spent very little time in this home. It hit the market with a price tag of $6.2 million. Highlights include a pool, 10,000 square feet of living space, and exceptional views of the Saadiyat Beach Golf Club and the ocean. 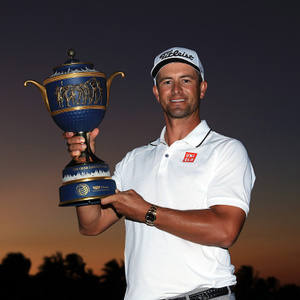