Viswanathan Anand net worth: Viswanathan Anand is an Indian chess champion who has a net worth of $3 million dollars. Born in Mayiladuthurai, Tamil Nadu, India, Viswanathan Anand grew up in Chennai. He graduated from Don Bosco Matriculation Higher Secondary School, and then earned his college degree from Loyola College, Chennai.

In 1998, he became India's first Grandmaster champion in Chess. Widely considered one of the best chess players ever, he is recognized for his calm, relaxed attitude, and his ability to excel at multiple styles of chess play, including Match, Knockout, and Tournament chess. He won the World Chess Championships in 2000, 2007, 2008, 2010, and 2012, and has held the title of World Champion since 2007. He is one of only 6 people to surpass the 2800 ranking mark on the FIDE, and as of 2012 he is currently fourth on the list. India has recognized him with numerous honors, including giving him their highest civilian award, the Padma Vibhushan. 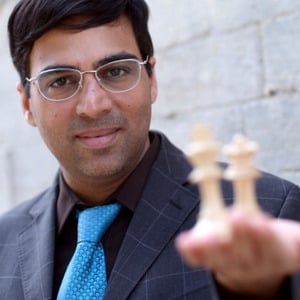