Del Negro played at North Carolina State University for Jim Valvano where he won the 1987 ACC Tournament and was named tournament MVP. Del Negro was drafted #29 by the Sacramento Kings in the 1988 NBA Draft. He played for the Kings from 1988 to 1990 and then played for Benetton Treviso in Italy from 1990 to 1992 where he won the Italian Championship in 1992. He returned to the NBA and played for the San Antonio Spurs from 1992 to 1998 and then returned to Italy to play for Teamsytem Bologna in 1999. Del Negro played for the NBA's Milwaukee Bucks from 1999 to 2000, Golden State Warriors from 2000 to 2001, and Phoenix Suns in 2001. After retiring he worked as a radio commentator for the Suns and then became their director of player personnel in 2006 and assistant general manager in 2007. From 2008 to 2010 Del Negro was head coach of the Chicago Bulls and he coached the Los Angeles Clippers from 2010 to 2013. He now works as an analyst for NBA TV. 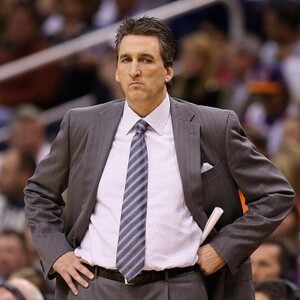