Tubby Smith Net Worth and salary: Tubby Smith is an American college basketball coach who has a net worth of $13 million dollars. Tubby Smith was born Orlando Smith in Scotland, Maryland, in 1951, and earned his nickname as a kid because of his love for bath time. His scholarship to the University of Maryland was withdrawn and he enrolled in High Point College, where Smith lettered in basketball for all four seasons and earned all-conferences honors when as a senior.

He graduated with a degree in health and physical education and joined the Air Force before he began coaching basketball at his former high school. His college coaching career began as an assistant at Virginia Commonwealth University between 1979 and 1986, where Smith was part of three Sun Belt Conference championship teams. He took assistant gigs at the University of South Carolina and University of Kentucky before landing his first head coaching position at the University of Tulsa. Smith finished with a 79-43 record in four seasons with the Golden Hurricanes, with two conference titles and two NCAA Tournament Sweet Sixteen appearances. He coached at the University of Georgia in the mid '90s before accepting a position with the University of Kentucky, where he replaced Rick Pitino, who was coming off a national championship. Smith emulated Pitino's success, winning the title in his first season with the Wildcats. His accomplishments in Kentucky include a perfect regular season conference record, five SEC regular season championships, five SEC Tournament wins, six Sweet Sixteen appearances, and four Elite Eight tickets. He resigned in 2007 to coach at the University of Minnesota and was eventually fired in 2013 after a disappointing tenure. Soon after, he was hired at Texas Tech University. Smith served as a coach for the U.S. national team during the 2000 Olympics when America won the gold medal. He and his wife, Donna, are active with the Tubby Smith Foundation in Lexington, Kentucky. 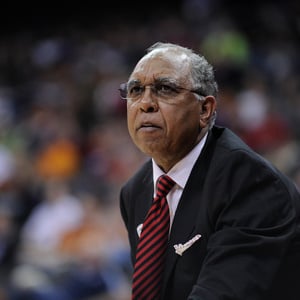