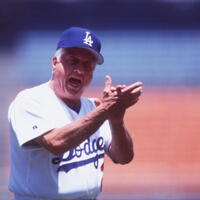 Tommy Lasorda Net Worth and Salary: Tommy Lasorda was an American professional baseball player and coach who had a net worth of $15 million at the time of his death in 2021. Tommy started his career as a Major League pitcher, but he later made a name for himself as a coach and manager. Today, he is best known for managing the Los Angeles Dodgers.

If you combine his playing career and his managerial tenure, Lasorda has been with the Dodgers for 11 consecutive seasons (as of 2020). This is the longest amount of time anyone has ever been with the Dodgers. In 1997, Tommy was inducted into the Baseball Hall of Fame. As of 2020, he was the oldest living person who of the Baseball Hall of Fame. Tommy died on January 8, 2021 at the age of 93.

Early Life: Thomas Charles Lasorda was born on September 22nd of 1927 in Norristown, Pennsylvania. Raised alongside 4 siblings by parents who were Italian immigrants to the United States, Tommy became passionate about baseball from a very early age. He even announced to his classmates that he would one day become a professional pitcher, although they laughed and dismissed his claims. Baseball was such a massive obsession for Lasorda that he allegedly knew the middle names of every professional player as a child.

Playing Career: Lasorda began his baseball career in 1945. The Philadelphia Phillies signed the young player as an undrafted free agent, but Tommy's career immediately went on hiatus with the breakout of World War II. He served in the United States Army during this period, and he returned to baseball after three years in 1948. The Schenectady Blue Jays took Tommy onto their team, and he played in the Canadian-American League over the next period.

During this stretch, Lasorda started to show his potential as a pitcher. During one game, he struck out 25 players. More impressive achievements followed, and this drew the attention of the Dodgers. After drafting the young Italian-American, the Dodgers sent Lasorda to play with the Greenville Spinners and other teams. During this period, Tommy also played in Cuba with the Cristobal Mottas and the Almendares. In 1954, Lasorda finally made his major league debut for the Brooklyn Dodgers.

After starting for the Dodgers in 1955, Lasorda threw three wild pitches and was quickly removed. Tommy never pitched for the Dodgers again. Still, his career continued with teams like the Kansas City Athletics, who then traded Lasorda to the New York Yankees in 1956. Throughout the next few years, Tommy found himself being sent to a number of different teams in places like Montreal and Cuba. During his time playing for Montreal, he led the Royals to four straight Governors' Cups and was later inducted into the Canadian Baseball Hall of Fame. In 1960, the Dodgers released Lasorda, and he ended his playing career.

Coaching and Managing: Despite being released by the Dodgers as a player, Lasorda was determined not to leave the organization. He first gained a job as a scout, and he spent the next four years searching for new players for the Dodgers. By 1966, Tommy started to manage the Pocatello Chiefs in the rookie leagues. During the next two years, he managed the Ogden Dodgers, leading them to three straight Pioneer League championships. Further tenures followed with the Spokane Indians, the Albuquerque Dukes, and the Tigres del Licey.

By 1973, Tommy Lasorda was ready to take on a more substantial position with the Dodgers. He became the third-base coach under manager Walter Alston, who taught Lasorda a great deal about coaching. After four years, Tommy replaced Alston as the Dodgers' manager – a move that many fans had predicted. Lasorda had turned down multiple offers from other teams in order to remain loyal to the Dodgers.

During his reign as manager of the Dodgers, Lasorda established an impressive record and won two World Series championships. He also won four National League pennants and eight division titles. After 20 years, Lasorda retired in 1996 after a 4-3 victory against the Houston Astros. Lasorda remains a beloved figure among Dodger fans, and a street in Dodgertown was renamed "Tommy Lasorda Lane" in his honor.

Despite retiring four years earlier, Tommy returned to baseball in 2000. He coached the United States Olympic Baseball team at the 2000 Summer Olympics, leading them to a gold medal win against Cuba.

After retiring from coaching, Tommy Lasorda became Vice-President of the Dodgers. In 1998, he then became the team's General Manager, although he resigned shortly afterward. He also acts as a special advisor to the Chairman, and his current duties include scouting, teaching minor league players, and representing the Dodgers at charity events.

Salary: In 1987 the Dodgers had the highest payroll in the MLB, with their 24 players earning a total of $13.9 million. FYI, in 2020 Clayton Kershaw earned $31 million in salary on his own. In 1987, Tommy was the second-highest manager in baseball with an annual salary of $500,000. That's the equivalent of $1.145 million in today's dollars. The highest-paid manager in the league was Pete Rose, who was earning $750,000 per year. In July 1988 Tommy's contract was extended with a "considerable raise", believed to be around $1 million per year, in a contract that ran through his retirement in 1996.

Health Issues: Just one day after retiring as the Dodgers manager, Lasorda suffered a heart attack. Somehow, he managed to drive himself to the hospital, where he successfully recovered after receiving treatment. Initially, he assumed that what he was experiencing was a case of abdominal pain. In 2012, he suffered another heart attack, but it was later revealed to be "not overly serious."

Other Ventures: Outside of baseball, Lasorda has appeared in a number of television shows and films, including "Homeward Bound II: Lost in San Francisco," "Ladybugs," "The Baseball Bunch," and "Everybody Loves Raymond."

Tommy also owned a stake in the company Lasorda Foods, which sold pasta sauces based on his wife's family recipe. This company was later acquired by Discovery Capital Corp, and then by Boca Raton. In 1993, Lasorda was paid in Modami shares for his stake in the company.

Real Estate: In 2015, it was revealed that Lasorda has sold a residence in Placentia, in Orange County, California. He managed to get $17,000 over the asking price, receiving a total of $535,000 for his townhouse. The 1,400-square-foot property features three bedrooms and a two-car garage. Additional highlights include LED lighting, quartz countertops, a stone-faced fireplace, and marble-lined showers.