Tom Osborne net worth: Tom Osborne is an American football coach and politician from Nebraska who has a net worth of $10 million. He was the head coach of the University of Nebraska Cornhuskers football team for 25 years from (1973 to 1997), succeeding Bob Devaney, and was one of the most successful coaches in American college football history.

Osborne was later elected U.S. Representative from Nebraska's 3rd congressional district, as a Republican. He served three terms, from 2001 to 2007. In 2007, he returned to the University of Nebraska as athletic director, and retired in January 2013. Osborne was born and raised in Hastings, a small town in rural central Nebraska. He graduated with a B.A. in history from Hastings College in 1959, and was awarded the Nebraska College Athlete of the Year. He was the first male Nebraska athlete to win both the high school and college athlete of the year awards and Osborne was drafted into the NFL by the Washington Redskins, for whom he played two seasons as a wide receiver; he also played one season for the San Francisco 49ers. Osborne earned a M.A. in educational psychology from Nebraska in 1963 and a doctorate in educational psychology there in 1965. He also served in the Nebraska Army National Guard from 1960–66. In 1964, Osborne joined the Cornhusker coaching staff as an unpaid offensive assistant to head coach Devaney; his only compensation was being able to dine at the athletic training table. Devaney announced he would step down as head coach at age 57 after the 1972 season and named Osborne as his successor – Osborne, at age 35, took over as head coach. He was head coach for 25 seasons, through the 1997 season, serving for most of that time as his own offensive coordinator. In his quarter-century as head coach, Osborne was a model of consistency. Osborne's teams were known for their powerful rushing attack and strong defense.

In 2000, he left football to pursue a career in politics and served as a US Representative from Nebraska for three terms. In 2006, Osborne ran for Governor of Nebraska, challenging Governor Dave Heineman and Omaha businessman Dave Nabity in the Republican Primary, but lost to Heineman by three percentage points. He and his wife, Nancy Tederman, have a son and two daughters. 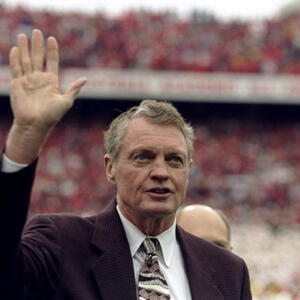