Tom Landry net worth: Tom Landry was an American professional football player and coach who had a net worth of $3 million. Tom Landry was born in Mission, Texas in September 1924 and passed away in February 2000. He was a cornerback, punter, quarterback, and running back who played at Mission High School and the University of Texas. Landry played for the New York Yankees of the AAFC in 1949 and for the New York Giants from 1950 to 1955. He was the defensive coordinator for the New York Giants from 1954 to 1959 and the head coach of the Dallas Cowboys from 1960 to 1988. Landry won two Super Bowl championships and one NFL Championship. In 1954 he was selected to the Pro Bowl and was a first-team All-Pro. He was also the NFL Punting Yards leader in 1952 and 1955. Landry was named the 1975 NFL Coach of the Year and holds the record for career wins with the Dallas Cowboys at 250. He is a member of the Pro Football Hall of Fame and the Dallas Cowboys Ring of Honor. Tom Landry passed away on February 12, 2000 at 75 years old. 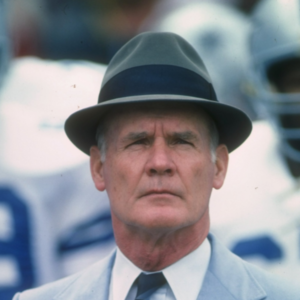