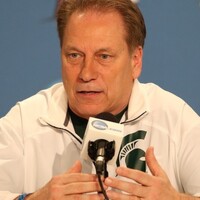 Tom Izzo Net Worth and salary: Tom Izzo is an American college basketball coach who has a net worth of $13 million dollars. Born in Iron Mountain, Michigan, in 1955, Tom Izzo played basketball at Northern Michigan University from 1973 to 1977, earning Division II All-American honors during his senior season. Izzo began coaching high school basketball before landing an assistant coaching job at his alma mater, where he stayed until 1983. He then scored a part-time assistant job at nearby Michigan State University. After brief stints elsewhere, Izzo returned to MSU as head coach in 1995, making him the longest-tenured basketball coach in the Big Ten. In his more than two decades in East Lansing, he has turned the Spartans into a perennial powerhouse that frequently sits atop the conference standings. Izzo won the 2000 NCAA National Championship and has appeared in six Final Fours. The Spartans have won seven Big Ten Championships and four Big Ten Tournaments. He has the most wins in MSU history and has made 17 straight NCAA tournament appearances. Izzo was recognized as the National Coach of the Year in 1998 by the Associated Press and as the Big Ten Coach of the Year in 1998, 2009 and 2012. Izzo took part in Operation Hardwood, a program that sends college coaches overseas to work with deployed American troops.