Tom Herman net worth: Tom Herman is an American college football coach and former player who has a net worth of $12 million. Tom Herman was born in Cincinnati, Ohio in June 1975. He was a wide receiver who played for Cal Lutheran. Herman became a wide receivers coach at Texas Lutheran in 1998.

He served as a graduate assistant at Texas from 1999 to 2000. Herman was the wide receivers and special teams coach at Sam Houston State from 2001 to 2004. He served as offensive coordinator and quarterbacks coach at Texas State from 2005 to 2006. From 2007 to 2008 he was the offensive coordinator and quarterbacks coach at Rice and he held the same positions at Iowa State from 2009 to 2011 and at Ohio State from 2012 to 2014. His first head coaching job came at Houston from 2015 to 2016. After the 2016 season he agreed to become the head coach at Texas and signed a five year deal worth $5 million in base salary per year. In 2015 he was named The American Co-Coach of the Year. 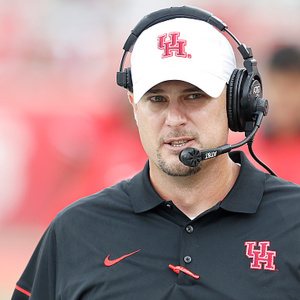