Tom Crean net worth and salary: Tom Crean is an American college basketball coach who has a net worth of $9 million. Tom Crean is the head coach for the Indiana Hoosiers basketball team where his annual salary is $2 million. Crean started as an assistant coach for Michigan State, where he also served as scout in 1989-90. After leaving Michigan, Crean moved on to Western Kentucky, where he served as an assistant coach during the next four seasons. Next he was an assistant coach in Pittsburgh and tried out for the job of head coach at Murray State University but lost that position to Mark Gottfied, a UCLA coach. In 1995, Crean returned to Michigan State as a recruiting coordinator and had a great deal of responsibilities such as, handling substitutions, calling plays, formulating play sheets and so much more. Crean was honored by Michigan State by receiving the 2000 National Championship ring. In 1999, Crean became the head coach of Marquette University because of his abilities as a recruiter, his experience in coaching and because he knew so much about the midwest, as well as, having exceptional work ethic. Crean created a new team image and in the 2001 USA Basketball men's national team trials, Crean was one of eight coaches chosen by USA Basketball. He was twice named Conference USA Coach of the year and received a long term, extended contract.

He became head coach of the Indiana Hoosiers in 2008, and even though it started out a bit slow in the beginning, things began to pick up in the third season. Crean worked on building player confidence and in January of this year the Hoosiers defeated Illinois, which was ranked 23rd. The Hoosiers' victory sent fans running from their seats and onto the basketball court, cheering. Crean has always been known as a strong leader and excellent recruiter. He is also known for his public relations know how, and was the creator of Midnight Madness at Marquette.

Crean was born in Mount Pleasant, Michigan, where he attended school at Central Michigan University, and was assistant coach at Mount Pleasant High School, as well as Alma College, for five seasons. While at Central Michigan University, Crean earned his degree in parks and recreation. Tom Crean is married to aerobics instructor, Joani Harbaugh and have three children, Ainsley, Megan and Riley. Joani's brothers are NFL coaches Jim and John Harbaugh. Her father Jack Harbaugh is the head coach of the Western Kentucky University football team. 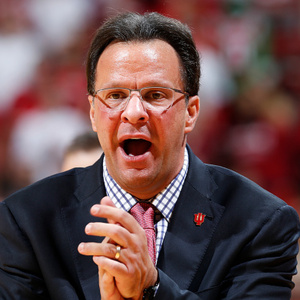