Todd Graham Net Worth and salary: Todd Graham is a former American football player and current head coach at Arizona State University who has a net worth of $12 million dollars. Born in Mesquite, Texas on December 5, 1964, he first served as all-district defensive back while studying at North Mesquite High School. In college, he continued to play football and he was a two-time All-NAIA defensive back. As for Graham's pro career as defensive back for NFL's Arizona Cardinals, it was a very brief stint. He began coaching in 1988 and has worked with various teams including Rice University, the University of Tulsa, and the University of Pittsburgh. Graham's head coaching record includes a college win/loss average of 67-38 and bowls average at 3-1. He became the head coach of Arizona State University on December 14, 2011. 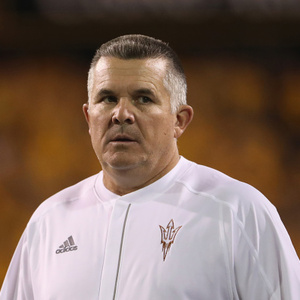