Terry Stotts net worth and salary: Terry Stotts is an American professional basketball coach and former professional basketball player who has a net worth of $6 million. Terry Stotts was born in Cedar Falls, Iowa in November 1957. Stotts was a forward and graduated from Bloomington North High School. He played for the University of Oklahoma from 1976 to 1980 where he was a two time Academic All-American and earned All-Big Eight Conference Honors.

Stotts was drafted in the 2nd round of the 1980 NBA Draft by the Houston Rockets but was cut from the team. He played in Italy for Squibb Cantu in 1980 and then for the Montana Golden Nuggets of the CBA from 1980 to 1983. He then played for CB Estudiantes in Spain and then Etoile de Voiron, Chorale Roanne, and Sceaux Basket in France. Stotts began his coaching career as an assistant for the Albany Patroons of the CBA from 1990 to 1991 and the CBA's Fort Wayne Fury from 1991 to 1992. He got his first NBA coaching job as an assistant for the Seattle SuperSonics from 1992 to 1998 and then for the Milwaukee Bucks from 1998 to 2002. Stotts got his first head coaching job with the Atlanta Hawks from 2002 to 2004. He worked as an assistant coach for the Golden State Warriors from 2004 to 2005 before being head coach of the Milwaukee Bucks from 2005 to 2007. He then served an as assistant coach for the Dallas Mavericks from 2008 to 2012 before landing another head coaching job with the Portland Trail Blazers in 2012. As an assistant coach Stotts won an NBA Championship with the Dallas Mavericks in 2011. 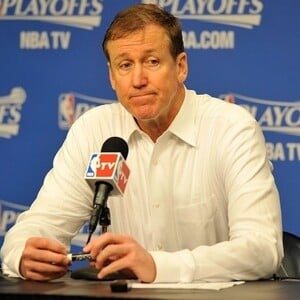