Steve Spurrier Net Worth and Salary: Steve Spurrier is a Florida-born football coach and former professional football player who has a net worth of $25 million dollars and an annual salary of $4 million. Known around the football community as "Head Ball Coach," Spurrier excelled during his college football years before playing for the San Francisco 49ers in the NFL.

Although his NFL career was spent mostly as a backup quarterback, he rose to prominence after retirement when he decided to become a coach. After beginning his coaching career with various college teams, he returned to the NFL to lead the Washington Redskins. That being said, Steve is mostly remembered for his involvement in college football – both as a coach and a player.

"Head Ball Coach" stood out among his peers due to his unique tactics. He often encouraged extremely aggressive and high-scoring strategies, and he was known to employ psychological tactics against his rivals, teasing and ridiculing them often. As a player, one of his best achievements was winning the Heisman Trophy in 1966. As a coach, he won a number of "Coach of the Year" awards. In addition, he led teams to eight successful SEC championships, six successful SEC Eastern Division championships, and many other championships.

After retirement, Spurrier served as an ambassador for the athletic program of the University of Florida. In 2017, he started working for SiriusXM Radio as a college football analyst. In addition, he makes frequent guest appearances on a range of TV sports programs.

Early Life: Stephen Orr Spurrier was born on April 20th of 1945 in Miami Beach, Florida. Raised by a Presbyterian minister, Steve and his family relocated several times while he was still young. Before Spurrier had his first birthday, the family had moved to Charlotte, North Carolina. After moving around throughout Steve's childhood, his father finally accepted a stable pastorship in Johnson City, Tennessee when his son was 12. Immediately, Steve started to show his athletic potential, excelling in football, high school, and basketball during his high school years. Despite the fact that he would later become a star quarterback, Spurrier was an exceptional pitcher and point guard for his baseball and basketball teams, respectively. However, he preferred football, and his prowess on the field drew the attention of many colleges.

Playing Career: Steve was eventually recruited by the University of Florida with coach Ray Graves promising him a fair chance to make it as a starting quarterback. Although he showed early potential, a knee injury stopped him from grabbing the starting position. By 1964, he had emerged as an incredible quarterback, throwing many touchdown passes. From 1965 to 1966, Steve broke numerous records and won the Heisman Trophy.

In 1967, he was selected by the San Francisco 49ers to play in the NFL. However, his stint in the NFL was disappointing at first. He didn't have many opportunities to play until 1972, when the starting quarterback became injured. At this point, he played well at first before his performance started to decline. As a result, he lost his starting position once again. After a number of up-and-down seasons with the 49ers, he was sent to the Tampa Bay Buccaneers before being released in 1977.

Coaching Career: Immediately after leaving the NFL, Spurrier returned to the University of Florida as the quarterbacks and receivers coach. This experience helped him win assistant coaching and coordinating positions at Georgia Tech and  Duke. His first head coaching position came with the Tampa Bay Bandits of the USFL, making him the youngest professional coach in 1983. He then returned to Duke to take on a head coaching position. At Duke, Steve started to establish himself as a truly talented head coach.

In 1990, he returned to the University of Florida for the third time in his life to take on the head coaching position for the Gators. This would prove to be the most defining part of Spurrier's coaching career, and he is widely remembered for defeating the Florida State Seminoles in 1997. He focused on a passing game and coached many future NFL greats. During this period, Steve broke a number of records, including being the only coach in college history to win as many as 120 games in his first 12 seasons.

Spurrier ended his coaching career with another stint in the NFL as head coach of Washington Redkins, which was largely a disappointment.  He then returned to college football with the University of South Carolina, returning to prominence once more before retiring in 2015.

Relationships: In 1966, Steve Spurrier married his college sweetheart Jerri Starr. They have had four children together and 14 grandchildren.

Real Estate: In 2018, it was reported that Spurrier was selling his home in Columbia, South Carolina. He had originally purchased the home back in 2005 for $1.25 million before listing it for $1.35 million. Although Steve obviously hoped to take away a small profit from the sale, he was forced to accept a loss. The home eventually sold for just $950,000. The property spans 6,386 square feet of living space, and it features five bedrooms. Despite his loss, Spurrier reportedly stated that he was "just happy to sell the home."

In 2021, Steve put his home in St. Augustine, Florida up for sale. With a price tag of $5.8 million, the residence sits on 2.58 acres of land across Crescent Beach. Boasting 7,723 square feet of living space and 5 bedrooms, the luxurious mansion was originally constructed back in 2010. The gardens are decidedly tropical, complete with palm trees and a range of other lush plants. The home itself features Mediterranean-inspired architecture. 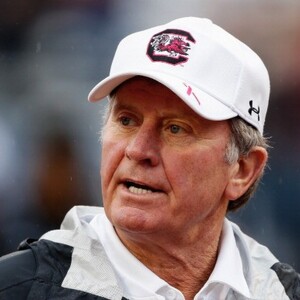