Stan Van Gundy net worth: Stan Van Gundy is an American professional basketball coach who has a net worth of $20 million. He is currently the head coach and president of basketball operations of the Detroit Pistons. From 2003-2005 he was the head coach of the Miami Heat but resigned from his position to join the Orlando Magic a few years later, eventually leading them to the 2009 NBA Finals. Van Gundy began his coaching career as an assistant coach at the University of Vermont. He went on to coach at several universities including Castleton State College, Canisius College, Fordham University, the University of Massachusetts Lowell, and the University of Wisconsin before becoming he General Manager of the NBA expansion in the Vancouver franchise. His first NBA coaching experience was with the Miami Heat, but in addition to coaching, Van Gundy spent a total of twelve years working with the Heat organization. He went on to coach the Orlando Magic, but not without some controversy. After both achieving success for the team and some controversial statements from Van Gundy to the media, he was relieved of his duties as head coach of the Orlando Magic. In May 2014, Van Gundy was hired as the new head coach and president of basketball operations of the Detroit Pistons. Van Gundy and his wife, Kim, have four children Shannon, Michael, Alison, and Kelly. His younger brother, Jeff Van Gundy, also coached two teams in the NBA and is a member of the NBA on ABC's broadcast team. Jeff Van Gundy was also an analyst during the 2009 NBA Finals while Stan coached the Orlando Magic. 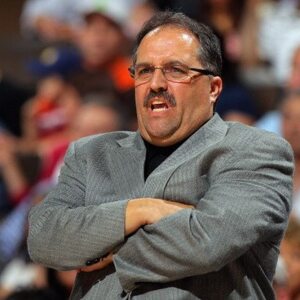