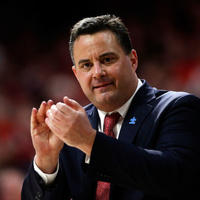 Sean Miller net worth and salary: Sean Miller is an American men's basketball coach who has a net worth of $9 million. His base salary is $5 million per year. Sean Miller was born in Ellwood City, Pennsylvania in November 1968. He was a point guard who played at the University of Pittsburgh and was on the all-rookie team for the Big East. Miller began his coaching career as a general assistant at Wisconsin from 1992 to 1993. He served as an assistant coach at Miami (OH) from 1993 to 1995. Sean Miller was an assistant coach at Pittsburgh from 1995 to 1996. He was an assistant coach at NC State from 1996 to 2001 and then at Xavier from 2001 to 2004. Sean Miller became the head coach at Xavier from 2004 to 2009. In 2009 he became the head coach at Arizona. He has been named the Pac-12 Coach of the Year in 2011, 2014, and 2017. Miller has won three Pac-12 Tournaments and five Pac 10/12 regular seasons.