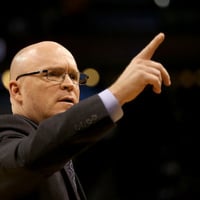 Scott Skiles net worth: Scott Skiles is an American professional basketball coach and former professional basketball player who has a net worth of $12 million. Scott Skiles was born in La Porte, Indiana in March 1964. He was a 6'1″ point guard who played for Plymouth High School. Skiles played his college basketball at Michigan State where he was a Consensus second-team All-American and the Big Ten Player of the Year in 1986. He later had his #4 retired by Michigan State. Skiles was drafted #22 by the Milwaukee Bucks in the 1986 NBA Draft. During his NBA career he played for the Bucks, the Indiana Pacers, the Orlando Magic, the Washington Bullets, and the Philadelphia 76ers. Skiles finished his playing career and started his coaching career in Greece. He was an assistant coach for the NBA's Phoenix Suns before being the head coach from 1999 to 2002. Skiles was the head coach of the Chicago Bulls from 2003 to 2007, the Milwaukee Bucks from 2008 to 2013, and the Orlando Magic from 2015 to 2016. During his career he set an NBA record for most assists in a game with 30 and was named the NBA Most Improved Player in 1991. Skiles also earned a Gold Medal representing the US at the FIBA U19 World Championship in 1983.