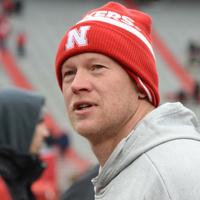 Scott Frost net worth: Scott Frost is an American football coach and former professional football player who has a net worth of $16 million. He is best known for being the quarterback of Nebraska's 1997 national championship team and for being named head coach of Nebraska in 2018. He was fired by Nebraska on September 11, 2022. His annual salary for coaching at Nebraska was $5 million. During his time as head coach at Nebraska, Scott earned $40 million and won just 16 games. That's $2.5 million per win.

Scott Frost was born in Lincoln, Nebraska in January 1975. As a quarterback he played for Wood River High School and Nebraska where he was the Big 12 Offensive Newcomer of the Year and two time AFCA National Champion. Frost was drafted by the New York Jets in the 1998 NFL Draft. He played for the Jets from 1998 to 2000. He also played for the Cleveland Browns in 2001, the Green Bay Packers from 2001 to 2002, and the Tampa Bay Buccaneers in 2003. As a coach he started as a graduate assistant at Nebraska in 2002. He also worked as a graduate assistant at Kansas State in 2006. Scott Frost was the linebackers coach at Northern Iowa in 2007 and also the co-defensive coordinator in 2008. He was the wide receivers coach at Oregon from 2013 to 2015. Frost was the head coach of UCF from 2016 to 2017 and became the head coach of Nebraska in 2018. He won the AAC championship in 2017. In 2017 he was named AP College Football Coach of the Year and won the Paul "Bear" Bryant Award.