Sandy Alomar Net Worth: Sandy Alomar is a Puerto Rican professional baseball player who has a net worth of $13 million. Born Santos Alomar Velazquez in Salinas, Puerto Rico, in 1966, Sandy Alomar made his Major League Baseball debut on September 30, 1988 as a member of the San Diego Padres. He played with the Padres until 1989 before joining the Cleveland Indians for the next decade from 1990 until 2000. Alomar then played with the Chicago White Sox from 2001 until 2002, the Colorado Rockies in 2002, the White Sox a second time from 2003 until 2004, the Texas Rangers in 2005, the Los Angeles Dodgers in 2006, the White Sox a third time in 2006, and, lastly, the New York Mets in 2007. Alomar last appeared on September 30, 2007 with the Mets. The right-handed catcher finished his pro playing career with a .274 batting average to go along with 112 home runs and close to 600 runs batted in. In 2010, after his retirement, Alomar became a coach for the Indians. Two years later, Alomar managed the Indians for six games, compiling a 3-3 record. As a player, he was a six-time MLB All-Star and won American League Rookie of the Year honors in 1990, the same year he won a Gold Glove Award. In 1997, Alomar was named MVP of the MLB All-Star Game. 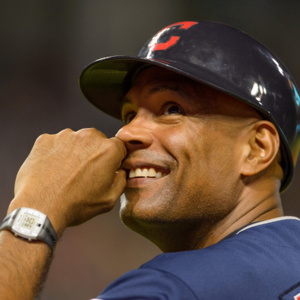