Williams went on to coach the Kansas Jayhawks for fifteen seasons and had a .805 winning percentage, making him second on the all time win list for the Jayhawks. Williams took the Jayhawks to the number 1 ranking position in the country for six seasons and out of the fifteen seasons they played, they ranked number two in the nation. During Williams time as head coach for the Kansas Jayhawks, all of his teams made it to the NCAA tournament and had the most wins and the best winning percentage of any team in the past ten years. In 2000, rumors flew that Roy Williams would be leaving Kansas and returning to North Carolina, but Williams called a press conference and informed everyone that his intentions were to remain at the University of Kansas. In 2003, things weren't going so well and Kansas was beaten in the NCAA Championship game against Syracuse. Williams and Athletic Director Al Bohl did not get along and Chancellor Robert Hemenway made the decision to let Al Bohl go. Bohl blamed Williams for him being fired and accused him of manipulating the whole thing. Roy Williams eventually made it back as head coach for the University of North Carolina. He was elected to the Basketball Hall of Fame in 2007. He is also a two time winner of the Associated Press Coach of the Year Award, making him the only coach ever to win this award twice. Forbes has named Coach Roy Williams as America's Best College Basketball Coach, in 2009.

He was born in Marion, North Carolina. When he was still a child, his family moved to Asheville, North Carolina. He attended T.C. Roberson High School, where he became all county and all conference for two years. He was also all-western North Carolina and during the North Carolina Blue-White All-Star game was team captain. At the University of Chapel Hill, Williams played on the UNC Junior Varsity team, while learning all he could from coach Dean Smith. Williams considers coach Dean Smith as a big influence in his life's decision to coach.

Williams and wife, Wanda, are the parents of one daughter and one son, as well as having four Godsons and one Goddaughter. Williams and his wife are contributors of the Carolina Covenant, helping low income students to obtain a college education. They have contributed $200,000, and are co-chairpersons of this $10 million campaign. He also has an autobiography titled, "Hard Work: Life On and Off the Court." 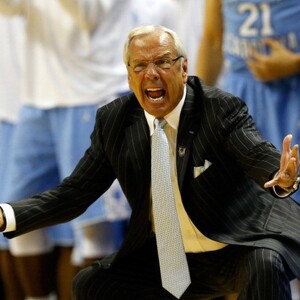