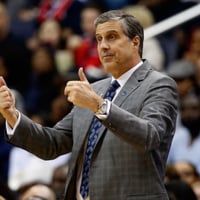 Randy Wittman net worth: Randy Wittman is an American professional basketball coach and former professional basketball player who has a net worth of $6 million. Randy Wittman was born in Indianapolis, Indiana in October 1959. Wittman was a guard who played for Ben Davis High School and Indiana University. He won an NCAA Championship and was a Consensus second team All-American. Wittman was drafted #22 by the Washington Bullets in the 1983 NBA Draft. His rights were traded to the Atlanta Hawks where he played form 1983 to 1988. He then played for the Sacramento Kings from 1988 to 1989 and the Indiana Pacers from 1989 to 1992. Wittman stayed on with the Pacers as an assistant coach from 1992 to 1993. He then worked as an assistant for the Dallas Mavericks from 1993 to 1994 and the Minnesota Timberwolves from 1994 to 1999. Wittman got his first head coaching job with the Cleveland Cavaliers from 1999 to 2002. He then went back as an assistant with Minnesota from 2002 to 2005 and for the Orlando Magic from 2005 to 2006. Wittman was the head coach of the Timberwolves from 2007 to 2008. He was an assistant with the Wizards from 2009 to 2012 before becoming their head coach in 2012.