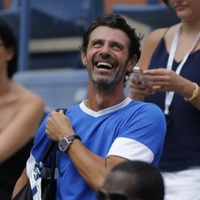 Patrik Mouratoglu net worth: Patrik Mouratoglu is a French tennis coach who has a net worth of $5 million. Patrik Mouratoglu was born in June 1970. He founded the Mouratoglu Tennis Academy in 1996. Mouratoglu has coached Marcos Baghdatis from 1999 to 2006, Anastasia Pavlyuchenkova from 2007 to 2009, Aravane Rezai from 2009 to 2010, Yanina Wickmayer from 2009 to 2012, Laura Robson from 2010 to 2011, Jeremy Chardy in 2012, and Serena Williams since 2012. During his coaching career Mouratoglu has won 28 singles titles as a coach and another three doubles titles as a coach. He has coached Serena Williams to a career Grand Slam, a 2015 Australian Open title, 2013 French Open title, 2012 Wimbledon Championships title, three US Open titles, a 2012 Olympic Gold Medal, and three WTA Tour Championships.