Nick Nurse net worth and salary: Nick Nurse is an American professional basketball coach who has a net worth of $3 million. Nick Nurse was born in Carrol, Iowa in July 1967. He played at the University of Northern Iowa. Nurse began his coaching career as an assistant at Northern Iowa from 1989 to 1990. From 1990 to 1991 he was a player coach for the Derby Storm. Nick Nurse coached Grand View from 1991 to 1993 and was an assistant coach at South Dakota from 1993 to 1995. From 1995 to 1997 he coached the Birmingham Bullets and then he coached the Telindus Oostende in 1998 and the Manchester Giants from 1998 to 2000 before coaching the London Towers from 2000 to 2001. Nurse was an assistant coach for the Oklahoma Storm in 2001 and coached the Brighton Bears from 2001 to 2006. From 2007 to 2011 he coached the Iowa Energy and from 2011 to 2013 he coached the Rio Grande Valley Vipers. Nurse got his first NBA job as assistant coach of the Toronto Raptors from 2013 to 2018. In 2018 he became the head coach of the Raptors. Nurse was named NBA D-League Coach of the Year in 2011 and won the NBA D-League championship twice and the BBL championship twice. When he signed to become the head coach of the Raptors, it came with a three-year $10 million contract. 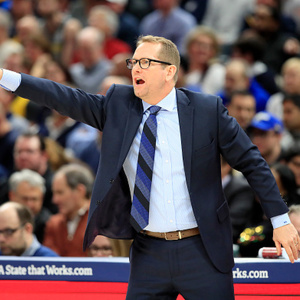