Mike Smith net worth and salary: Mike Smith is an American football coach who has a net worth of $12 million and annual salary of $4.5 million. Mike Smith was born in Chicago, Illinois in June 1959. He is best known for being the current head coach of the NFL's Atlanta Falcons. Mike is the oldest of eight children and the brother-in-law of former NFL head coach Brian Billick.

Before coaching he played linebacker and earned All-State honors at Father Lopez Catholic High School. He was defensive MVP twice while playing at East Tennessee State University. In 1982 Smith played for the Winnipeg Blue Bombers in the Canadian Football League. Smith served as an assistant coach at San Diego State from 1982 to 1985, Morehead State in 1986 and Tennessee Tech from 1987 to 1998. Smith became an assistant coach for the Baltimore Ravens in his first NFL experience in 1999. He stayed with Baltimore until 2002 and became defensive coordinator for the Jacksonville Jaguars from 2003 until 2007. In his first year as head coach of the Atlanta Falcons in 2008 he led the team to an 11-5 record and made it to the NFC Wild-Card Game. In 2010 and 2012 the Falcons went 13-3 and the team made it to the NFC Championship Game in 2012. In 2014 he and the Falcons were featured on HBO's Hard Knocks. 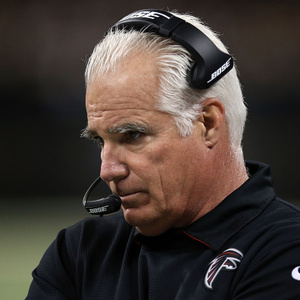