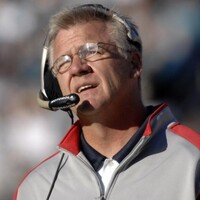 Mike Sherman net worth: Mike Sherman is an American former professional football coach who has a net worth of $4 million. Mike Sherman was born in Norwood, Massachusetts in December 1954. As a football player he played defensive end and offensive tackle for Central Connecticut State. After graduating Sherman got his first coaching job at Stamford High School in 1978. From there he coached at Worcester Academy from 1979 to 1980. Sherman became a Graduate Assistant at Pittsburgh from 1981 to 1982 and then an offensive line coach at Tulane from 1983 to 1984. He was the offensive line coach at Holy Cross from 1985 to 1987 and then the offensive coordinator in 1988. Sherman was the offensive line coach at Texas A&M from 1989 to 1993 and then at UCLA in 1994 and back at Texas A&M from 1995 to 1996. He got his first NFL job as tight ends coach for the Green Bay Packers from 1997 to 1998. In 1999 he was the offensive coordinator of the Seattle Seahawks. Sherman's first NFL head coaching job came with the Green Bay Packers from 2000 to 2005. He then was the assistant head coach for the Houston Texas in 2006 and offensive coordinator in 2007. From 2008 to 2011 Sherman was the head coach at Texas A&M. From 2012 to 2013 he was the offensive coordinator for the Miami Dolphins. In 2015 Sherman became the head coach at Nauset Regional High School. During his time as coach of the Packers he led the team to five straight winning seasons and three straight divisional titles. In 2007 he signed a seven year deal with Texas A&M worth $1.8 million a year.