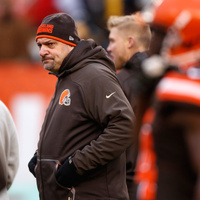 Mike Pettine Net Worth and salary: Mike Pettine is an American professional football coach who has a net worth of $4 million. Mike Pettine was born in Doylestown, Pennsylvania in September 1966. Pettine earned all-state honors in high school as a quarterback and defensive back and played free safety at the University of Virginia. He served as a graduate assistant for the University of Pittsburgh from 1993 to 1994 and then was head coach at William Tennent High School from 1995 to 1996. Pettine was head coach at North Penn High School from 1997 to 2001. He joined the Baltimore Ravens as a coaching assistant from 2002 to 2003. He stayed with the Ravens as assistant defensive line coach in 2004 and as outside linebackers coach from 2005 to 2008. Pettine became defensive coordinator for the New York Jets from 2009 to 2012 and then for the Buffalo Bills in 2013. He got his first NFL head coaching job in 2014 with the Cleveland Browns.