Mike McCarthy Net Worth and salary: Mike McCarthy is an American professional football coach who has a net worth of $9 million. Mike McCarthy was born in Pittsburgh, Pennsylvania in November 1963. McCarthy played tight end at Baker University in Baldwin City, Kansas. He served as a graduate assistant at Fort Hays State from 1987 to 1988 and then became quarterbacks coach at the University of Pittsburgh from 1989 to 1991.

He moved to wide receivers coach for the 1992 season. McCarthy went to the NFL and served as offensive quality control assistant for the Kansas City Chiefs from 1993 to 1994 before being promoted to quarterbacks coach from 1995 to 1998. McCarthy then served as quarterbacks coach for the Green bay Packers in 1999 and was offensive coordinator for the New Orleans Saints from 2000 to 2004. He was the offensive coordinator for the San Francisco 49ers in 2005 before becoming head coach of the Green Bay Packers in 2006. McCarthy won a Super Bowl as coach of the Packers in 2010. He was named Motorola NFL Coach of the Year in 2007. In November 2014 he signed a contract extension with the Packers through 2018. On December 2, 2018 Mike was fired from the Packers. 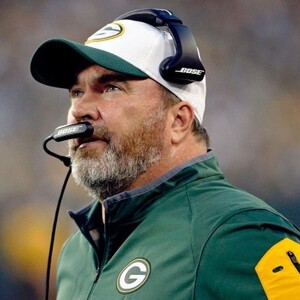