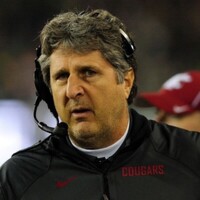 Mike Leach Net Worth and salary: Mike Leach was an American college football coach who had a net worth of $8 million at the time of his death. Tragically, Mike died unexpectedly on December 12, 2022 at the age of 61. Born in 1961 in Susanville, California, Mike Leach attended Brigham Young University, though he did not play for the football team. He earned an American studies degree before going on to get his law degree from Pepperdine University. Leach began his football coaching career as an assistant with Cal Poly in 1987. He served as an assistant at COD before becoming the head coach of the Pori Bears. In 1989, Leach accepted the offensive coordinator gig with Iowa Wesleyan, where he stayed until 1992 when he took the same position at Valdosta State. Leach served as Kentucky's offensive coordinator from 1997 until 1998 before spending a single season in the same role for Oklahoma. In 2000, Texas Tech hired Leach as their head coach, which was the first head coaching job in Leach's career. He led the Red Raiders until 2009. After a three-year hiatus from coaching, Leach was hired on as the head coach at Washington State, where he remains as of 2014. Midway through the 2014 season, Leach has amassed a 96-67 career win-loss record to go along with a .500 record in bowl games. He won one Big 12 South Division championship in 2008. Leach has earned Big 12 Coach of the Year honors, the Woody Hayes Trophy, and the George Munger Award. In 2020 he took the head coaching job for Mississippi State University.