Mike Gundy Net Worth: Mike Gundy is an American college football coach and former player who has a net worth of $10 million. Mike Gundy was born in Midwest City, Oklahoma, in 1967, and he played college football close to home for the Oklahoma State University Cowboys as the team's quarterback.

His college coaching career began at his alma mater as a wide receivers coach in 1990. In 1991, Gundy was promoted to quarterbacks coach, and, in 1994, he was promoted a second time to offensive coordinator. Five years later, he left to coach quarterbacks at Baylor and later wide receivers at Maryland. In 2001, Oklahoma State brought Gundy back to the team as an offensive coordinator. Four years later, he was promoted to head coach, the first head coaching role of his career. Gundy has been with the team ever since, and, part way through the 2014 season, has amassed a career record of 82-44. He is 5-3 all-time in bowl games. Gundy has won one Big 12 championship (2011) and earned Big 12 Coach of the Year honors in 2010. In 2011, Gundy was named the Eddie Robinson Coach of the Year and earned the Paul Bear Bryant Award. Gundy was named in a 2013 "Sports Illustrated" series detailing allegations of misconduct at Oklahoma State over the decade between 2001 and 2011. Gundy denied the publication's accusations. He has three children with his wife, Kristen. 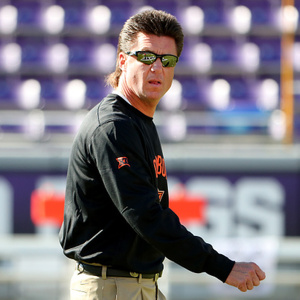