D'Antoni was the #20 pick by the Kansas City-Omaha Kings in the 1973 NBA Draft. He played for the Kings from 1973 to 1975 and then for the Spirits of St. Louis of the ABA from 1975 to 1976. In 1976 he played for the San Antonio Spurs before finishing his career in Italy playing for Olimipia Milano from 1977 to 1990. During his playing career D'Antoni was a five time Lega Basket Serie A champion and a two time Euroleague champion. He also won two Italian Basketball Cups, a Korac Cup, and a FIBA International Cup. He was named as one of the 50 greatest contributors in Euroleague history. D'Antoni coached Olimpia Milano from 1990 to 1994 and Benetton Basket from 1994 to 1997. He coached the Denver Nuggets of the NBA from 1998 to 1999 and then was an assistant coach for the Portland Trail Blazers from 2000 to 2001. He returned to coach Benetton Basket from 2001 to 2002 and then coached the Phoenix Suns from 2003 to 2008. D'Antoni coached the New York Knicks from 2008 to 2012 and the Los Angeles Lakers from 2012 to 2014. As a coach he won the Korac Cup and Italian Basketball Cup and was a two time Lega Basket Serie A champion. In the NBA he was named Coach of the Year in 2005 and he coached the All-Star Game in 2007. He signed a four year deal for $24 million with the Knicks in 2008 and a three year deal with the Lakers for $12 million in 2012. 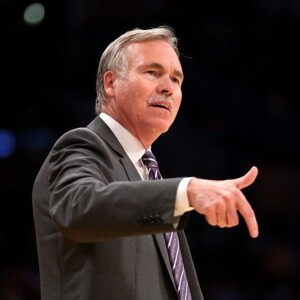