Matt Rhule net worth: Matt Rhule is an American professional football coach and former football player who has a net worth of $20 million. He is becoming head coach of the Carolina Panthers in 2020. In January 2020 it was revealed that Matt had signed a contract that could be worth as much as $70 million over seven years.

Matt Rhule was born in New York, New York in January 1975. He was a linebacker who played at State College Area High School and Penn State. Rhule served as linebackers coach at Albright in 1998. From 1999 to 2000 he was the defensive line coach at Buffalo. In 2001 Matt Rhule was the defensive line coach at UCLA. He was the special teams and linebackers coach at Western Carolina in 2002 and the team's associate head coach, special teams coach, and linebackers coach from 2003 to 2004. In 2005 he added running back coordinator to his duties at the school. Rhule served as the defensive line coach at Tempe in 2006 and was the team's quarterbacks coach and recruiting coordinator in 2007. From 2008 to 2010 he was Temple's offensive coordinator and quarterbacks coach and he was the team's OC and tights ends coach and recruiting coordinator in 2001. He served as the assistant offensive line coach of the NFL's New York Giants in 2012. Matt Rhule was the head coach at Temple from 2013 to 2016 and won the AAC Championship in 2016. He was the head coach at Baylor from 2017 to 2019 and was the Big 12 Coach of the Year in 2019. He became head coach of the NFL's Carolina Panthers in 2020. 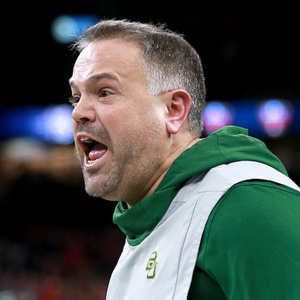