Marvin Lewis Net Worth and salary: Marvin Lewis is an American professional football coach who has a net worth of $14 million dollars and annual salary of $4.5 million. Marvin Lewis was born in McDonald, Pennsylvania in September 1958. He started playing football at nine years old and was a quarterback and safety at Fort Cherry High School.

He played for Idaho State University and earned all-Big Sky Conference honors for three years in a row. He made his coaching debut in 1981 as a linebackers coach for Idaho State University. He took the same position at Long Beach State, University of New Mexico, and University of Pittsburgh. In 1992 Lewis became a linebackers coach in the NFL for the Pittsburgh Steelers. In 1996 he became defensive coordinator for the Baltimore Ravens. He took the same job in 2002 for the Washington Redskins before being hired as head coach of the Cincinnati Bengals in 2003. As of 2014 he is the 2nd longest tenured head coach behind Bill Belichick. Lewis was behind the record setting Baltimore Ravens defense that won Super Bowl XXXV. Lewis was named coach of the year by the Associated Press in 2009 after his team finished 10-6 and won the AFC North division championship. He was the first Bengals coach to lead a team to three straight playoff appearances (2011-2013). 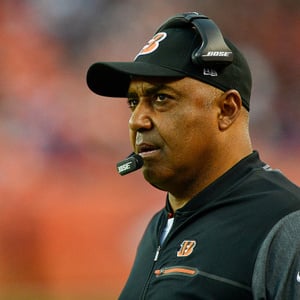