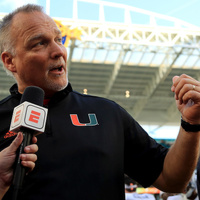 Mark Richt Net Worth: Mark Richt is an American college football coach and former player who has a net worth of $9 million. Born in 1960 in Omaha, Nebraska, Mark Richt played college football as a quarterback at the University of Miami from 1979 until 1982. His coaching career started three years later with Florida State as a graduate assistant in 1985, a position he held until 1988. In 1989, Richt earned the offensive coordinator position at East Carolina. One year later, Florida State hired Richt as their quarterbacks coach. In 1994, Richt was promoted to offensive coordinator, and he held that role until 2000. In 2001, Georgia hired Richt as their head coach, the first head coaching job of his career. As of the 2014, Richt remains Georgia's head coach. He has a 135-47 win-loss record to date to go along with an 8-5 all-time bowl game record. He has won two SEC championships and six SEC Eastern division titles. Richt has been named SEC Coach of the Year twice in 2002 and 2005, the same seasons in which he won the conference title. Richt has four children with his wife, Katharyn, including two children who were adopted from Ukraine. Their adoption process was documented on an episode of "College GameDay" on ESPN.