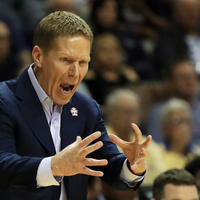 Mark Few Salary: As of this writing, Mark's base salary is $1.8 million. He also has the ability to earn bonuses based on various milestones.