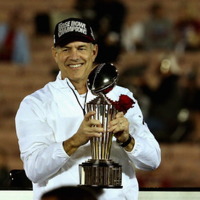 Mark Dantonio Net Worth: Mark Dantonio is an American college football coach and former player who has a net worth of $14 million. Mark Dantonio was born in El Paso, Texas, in 1965, and played college football for the University of South Carolina Gamecocks from 1976 until 1978 as a defensive back. Dantonio graduated from the school in 1979 and earned his master's from Ohio University a year later. Dantonio began his college coaching career in 1980 while earning his master's. he worked as a graduate assistant at the school until he spent a season as a graduate assistant with Purdue. He later coached at Butler Community College, Ohio State University, Akron, Youngstown State, and Kansas. In 1995, he landed the role of defensive backs coach for the Michigan State University Spartans. He remained in East Lansing until 2000 when he was hired as the defensive coordinator for the Buckeyes. Dantonio held that role until 2003, when he briefly coached for two seasons as the head coach at the University of Cincinnati. Following his success with the Bearcats, the Spartans made Dantonio their head coach in 2007, a position which he holds well into the 2014 season. Dantonio has amassed a 91-48 overall record as a head coach, and, prior to the 2014 postseason, a 4-4 bowl game record. To date, he has won two Big Ten championships in 2010 and 2013 and is a two-time Big Ten Coach of the Year award winner in both of those seasons as well. Dantonio has two children with his wife, Becky, to whom he has been married since 1990.