Lovie Smith Net Worth and Salary: Lovie Smith is an American football coach who has a net worth of $20 million and annual salary of $5 million. Lovie Smith was born in Gladewater, Texas in May 1958. Smith earned all-state honors as a defensive end and linebacker in high school. Smith's team won three consecutive state champions from 1973 to 1975. He played at the University of Tulsa where he was a two time All-American. Smith started coaching in 1980 for his alma matter Big Sandy High School as a defensive coordinator. He was an assistant coach at Cascia Hall Prep from 1981 to 1982. Smith was a linebackers coach at his other alma matter Tulsa from 1983 to 1986. He was a linebackers coach at Wisconsin, Arizona State, and Kentucky and then became a defensive backs coach at Tennessee and Ohio State. In 2005 he was named AP NFL Coach of the Year and PFW NFL Coach of the Year. He has won the NFC North division three times and the NFC Championship in 2006.

Smith made his NFL debut as linebackers coach for the Tampa Bay Buccaneers from 1996 to 2000. He served as defensive coordinator for the St. Louis rams from 2001 to 2003. Lovie first became an NFL head coach in 2004 when with the Chicago Bears. He coached there until 2012. From 2014 to 205 he coached the Tampa Bay Buccaneers. In 2016 he went back to college coaching when he was hired by the University of Illinois. During his time with Illinois he earned $20 million in salary and bonuses. His win/loss record in that time was 17-39. 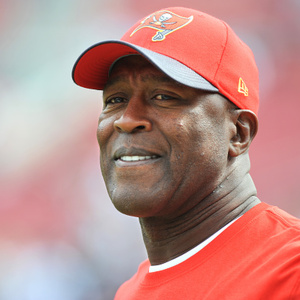