How much is Lou Holtz Worth?

Lou Holtz net worth and salary: Lou Holtz is an American former football coach and former college football analyst for ESPN net worth of $20 million. As of this writing he is the only college coach to bring six different school teams to bowl games. He most recently coached for the University of South Carolina from 1999 – 2004. His peak coaching salary was $6 million per year with South Carolina.

Born in Follansbee, West Virginia, Lou Holtz graduated from Kent State University in 1959 and began assistant coaching football a year later. After earning his Master's Degree from the University of Iowa, he went on to assistant coach at a number of universities, including William and Mary, South Carolina, and Ohio State. He moved to head coaching in the late 60's, beginning with William and Mary, and then moving to North Carolina State. After attempting one season with the New York Jets, he returned to coaching college football at the University of Arkansas in 1977, and then became Head Coach at Notre Dame in the mid-80s. Under his directorship, Notre Dame went to the finals for nine consecutive years. After retiring in 1996, he returned to coach South Carolina for four years. Those his time with SC was also quite successful, it was also marred with a number of penalties and accusations of NCAA rule breaking. 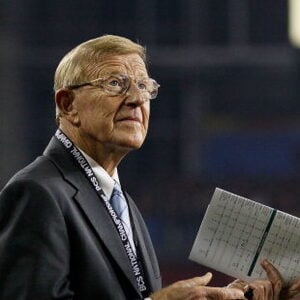